How a Bill Becomes Law in Canada 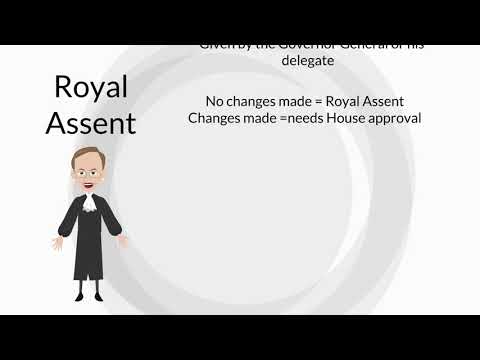 I will be talking about the type and process surrounding the passing of a bill There are three principal types of bills. Government bills, private member’s bills, and private bills. Government bills are introduced to Parliament on behalf of government by a Cabinet minister Private Member’s Bills are introduced to Parliament by a Private Member. A Private Member is every MP who is not a Cabinet Minister. This means that any member of the governing party who is not a Cabinet Minister is considered a private member. Private Bills are rare these days, but their purpose is to either confer special powers or benefits on one or more person, which includes corporations, or to exempt them from the application of a statute. Private Bills cannot be introduced by a Minister and must be founded on a petition signed by the persons interested in promoting it.

Examples of Private Bills include: an act to exempt a church from general taxation rules on sale of property. And up until the 1960s, divorces were only granted by a private act of federal Parliament. Now we are going to go over how a bill becomes law. In general, a bill becomes law if it has passed through the following stages of the legislative process: there is the Introduction, First Reading, Second Reading, Committee Stage, Report Stage, Third Reading, and Royal Assent A bill will need to pass through steps 1 to 6 twice, or once in each chamber before the bill can attain Royal Assent. Let’s begin with the First Reading. Typically, at first reading, the bill is not actually read, but is distributed to the members.

A short speech may accompany this distribution, or simply an announcement that the bill is receiving its first reading, as seen in this example from a transcript from the House of Commons proceedings. Now for the Second Reading, which is when the bill is debated. All debates must be focused on the general principles of the bill. However, details of provisions are not debated at this stage. Next up is the Committee stage. Following debates at a second reading, there is a vote to determine whether the bill should proceed to committee and which committee it should go to. Depending on the scope of the bill, committees often have lengthy hearings (including witnesses, etc.), where they debate the merits of the bill, as well as technicalities like wording. Before going to third reading, the Committee that analyzed the bill will report back to Parliament with recommendations. This is called the “report stage”.

Royal Assent is given by the Governor General or his or her delegate. The number assigned to the bill changes to a chapter number. For example, Bill C-47 became S.C. 2007, c. 25. This signifies that the bill, now being law, will be printed in Chapter 25 of the 2007 Annual Statues of Canada. The bill is then printed in the Canada Gazette, Part III, on the Justice Laws Website (which is part of the Department of Justice Website) and in the annual volume of Statutes of Canada. Take a look at this Bill C-47 Royal Assent version from June 22, 2007, 39th Parliament – 1st Session. Note the assigned chapter number 25: And here is an example of an Act respecting the protection of marks related to the Olympic Games. Chapter 25 in the Annual Statues of Canada. Note the Short Title: Olympic and Paralympic Marks Act. This is the title that will be used once it is published…. On the web… And in print. Lastly, there is the Proclamation Stage. In order for a law to enter into force, it must be proclaimed after it has received Royal Assent.

The proclamation typically occurs by Order-In-Council. Usually, a law comes into force or takes effect on the day it receives Royal Assent unless another date is set. Keep in mind, when citing a bill, you should use the long title provided during the legislative process. When citing an Act, you should be using the short title it is referred to by, once it receives Royal Assent. It is also worth noting that not all bills have a short and long title. In such cases, use whatever title is provided. And we’re finished! Please continue with the remainder of the learning module..